Humanity Along the Chindwin (Part 2)

We traveled further north the next day and arrived at Masein, south of Mawlaik. CERS had commissioned a small pagoda there at the Tropic of Cancer. A family of eight had also built a small hut next to it. While we were enjoying our barbecue lunch, the villagers continuously watched us. I couldn’t help but speculate what they were thinking.  “Where were they from?” or could it be “What are they eating?” or “Will they kick us out of this place?”. This prompted me to show our friendliness, and I asked Sandra, CERS Myanmar Coordinator, to give some of our food to them. Soon enough, a big bowl of fried rice was handed over to the family. I saw the family consume the rice rather quickly. I hoped I had made their day special. To many of the villagers along the Chindwin, all they had were their hut, their livestock, and the river water. The river was the place where they washed their clothes, brushed their teeth, dumped their trash, and collected their drinking water. 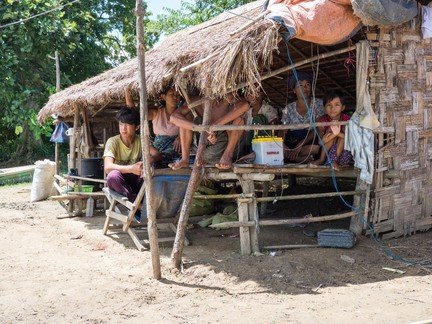 Family of eight on the Tropic of Cancer. (Photo by Ir Dr. Derrick Pang, JP)

We arrived at Mawlaik around 4pm. I could hear music from the local monastery even before we docked. Quite a number of activities were happening along the shore, which was populated with restaurants, vehicle workshops, jewelry shops, etc. We went for a stroll and got to spend some time speaking to a pair of brothers who make and sell jewelry. We tried to explore inland a bit, but realized that the streets were flooded. Whomever I pointed my camera at gave me warm and sincere smiles. In Hong Kong, when I went to shoot street photos, I would keep my earbuds on to drown out swears and curses. At night, I had the chance to gaze at the Milky Way, something that I didn’t get to do living in the city. 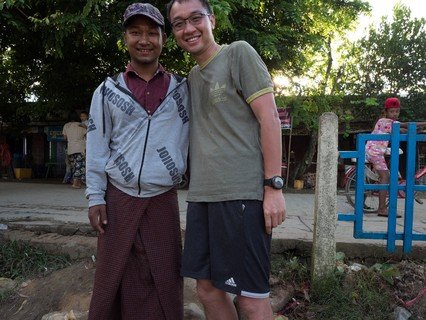 A local villager who asked for a photo together. 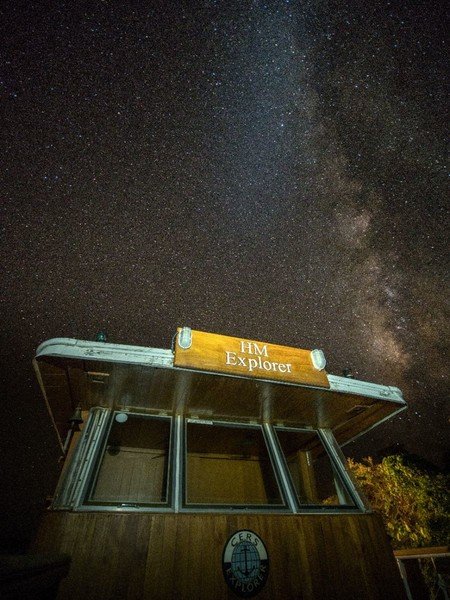 On the next day, How Man had the idea of cruising up one of the tributaries of the Chindwin. With the serious flooding, he thought we could get close to India. We arrived at Yuwa and got on canoes, 3 to 4 of us in each. The mechanical noise of the small motor engine together with the sound of the canoe piercing the water gave a rhythmic and soothing tone. Even with the scorching sun above, I soon started to fall asleep. We traveled for an hour before lunch and continued on for another hour. We were getting close to Tamur again, but we turned back due to the incoming storm. Much of the area had been flooded, but some of the buffalos continue grazing. This was the first time that I realized that buffalos and cows just kept grazing - they didn’t stop and look up at all. Then I saw a Buffalo having a difficult time getting back onshore; I thought the river current was going to take it downstream. Everyone and everything seemed to be affected by the flood. 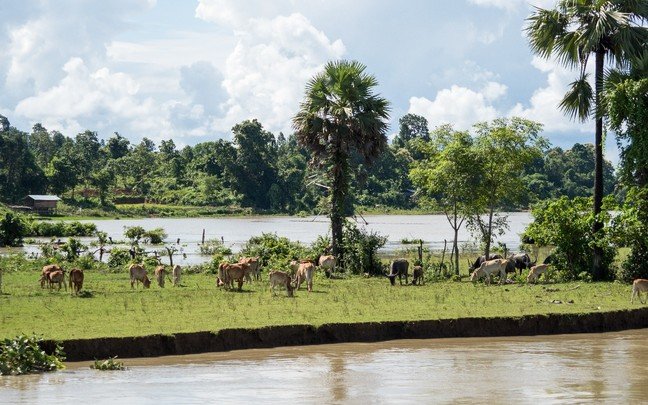 Our northbound adventure concluded on the sixth day, and we turned around to head back to Mandalay on the next morning. Travelling with the current, we reached a speed of 27km/hr, triple the northbound speed. It only took us two days to get back to Mandalay with time to spare. 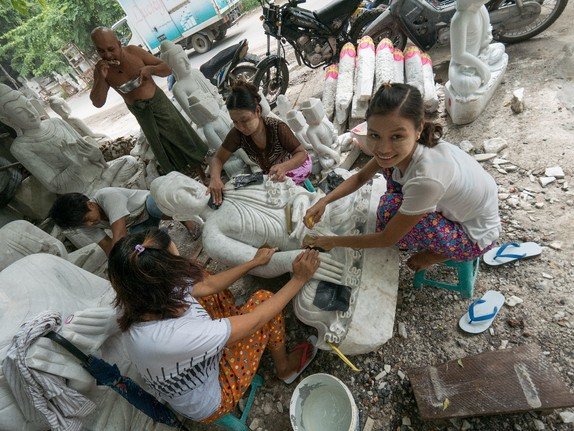 Along the way back to Mandalay, I witnessed how the flood had affected the lives of many Burmese.  Much of the land had been turned into lagoons, and the high grounds were now small islands. Villagers, including kids, were forced to live on the top floors of their huts. Many were traveling in canoes, and some were trying to salvage whatever was left. They tried to bring their buffalos through the flood to the remaining small islands. Some of the islands were only around a few sq. meters and were packed with tens of buffalos. 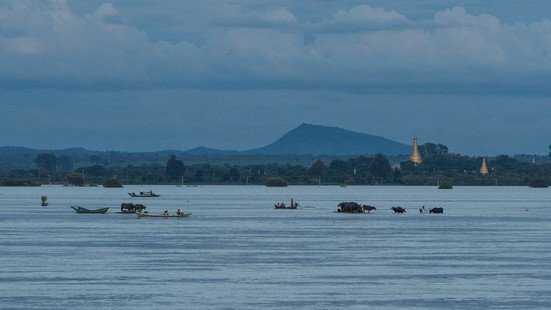 Villages were trying to rescue their buffalos by bringing them back to the remaining land. (Photo by Ir Dr. Derrick Pang, JP)

Coincidentally, Hong Kong was hit by a major typhoon at the same time. When news and videos showing the damage caused by the typhoon started to flood my mobile, I could not help but compare how two different places dealt with natural disasters and how their people responded. The villagers on the Chindwin had no way to ask their government for help and so took matters into their own hands; while Hong Kong people expected their government to protect them. Humans always want more, but shall we get more by asking or by endeavoring? It is important to be reminded how fortunate I am, so as not take things for granted, but also to learn to accept the unexpected and adversity.

This trip reminded me that lives can be simple. We could be content with a lot less, and each one of us could do a lot more to help others. This had been said many times, but to actually experience it, through traveling with basic necessities (aside from my camera gear) and through witnessing the changes we could make to villagers with little resources, was a stark reminder. 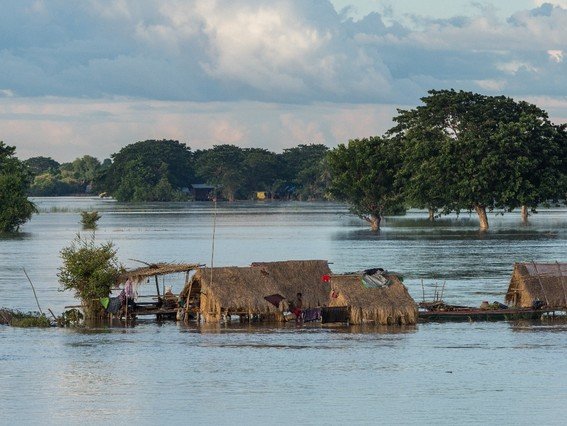 Stranded by the flood and living on the roof. (Photo by Ir Dr. Derrick Pang, JP)

During the trip, How Man shared documentary videos about CERS’s previous projects: bringing back Burmese Cats to Myanmar, discovering river sources, preserving the Hainan Li people’s culture of adobe huts, and many more. CERS had made a difference to mankind. While the difference may have been small and may have only applied to a limited number of people, it was a difference, nonetheless. Just as How Man has said, while the beginning of each conservation project was driven by passion, the CERS team had carried through tirelessly because of commitment. And commitment and passion continues to inspire people around to continue the journey. (End) 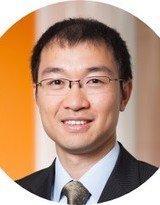 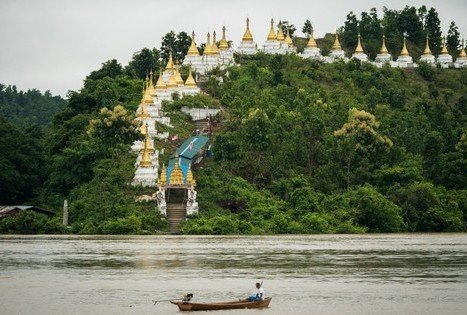 Humanity Along the Chindwin (Part 1)